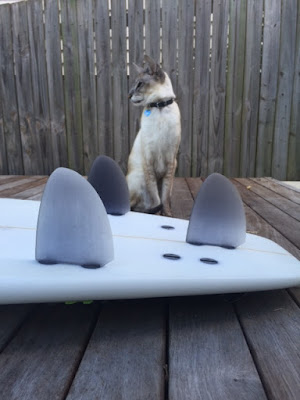 Namaste Fin Fondlers and welcome to this instalment of making surfboard fins using epoxy casting resin. You may have noticed that things have been a bit on the quiet side on my blog. The rumours have been flying around and it has absolutely nothing to do with my new interest in gerbil farming. I have been busily beavering away in the Ashram working on some new and exciting fin creations, in wood and also resin. I have also been researching into the amazing hydrodynamic properties of elliptical fins and applying this new found knowledge to fin design. I've managed to create an elliptical 9" long board fin using CNC machined marine ply and the results have been fantastic. But more of that in a future post. In the meantime, put on the kettle, make yourself a nice hot cuppa char, sit back and enjoy.

I wanted to design a set of thruster fins based on the principles of elliptical plan forms like the Spitfire wings of the WW2 aircraft used by the RAF. I also wanted to incorporate NACA symmetrical air foils which are known for their excellent high lift and low drag properties. What I ended up designing was an elliptical fin with a base of 100 mm and a height of 110 mm with an elliptical plan shape and aspect ratio lower than that of the traditional Spitfire wing. I chose a NACA0012 foil which has a good lift to drag ration over a number of angles of attack and Reynold's numbers less than 1,000,000. 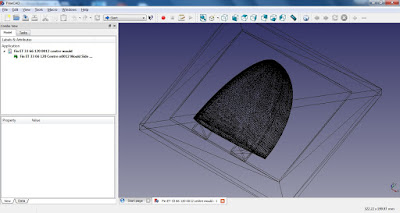 The first step involved designing the fin in CAD (Computer Aided Design) software. I've been using FreeCAD which is a free open source package. It's taken a bit of time to learn the ins and outs of the software but I've managed to teach myself everything I needed to know to put together a fin design. Once the fin was designed I super-imposed it over a mould block to form the mould blank. 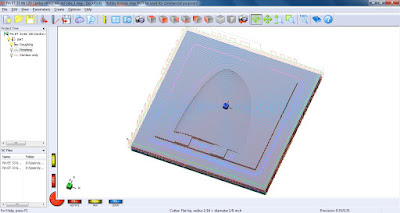 The mould design was then imported in CAM (Computer Aided Manufacture) software. This is where the tool paths were created. These tool paths are a set of numbered coordinates that the CNC machine used to cut the mould out of a timber block. 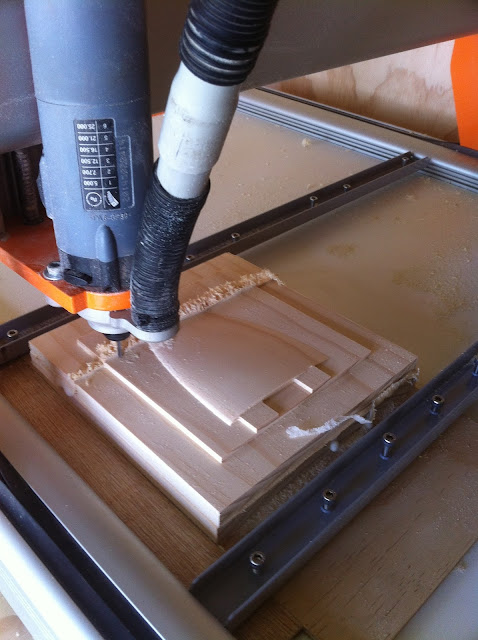 Now the fun bit. Letting the machine do its thing. Cutting the mould blank out of high quality (Furniture grade) pine. This took about 3 - 4 hours. It's high precision stuff accurate to 0.001 mm. A mould block was machined for each side of the fin. 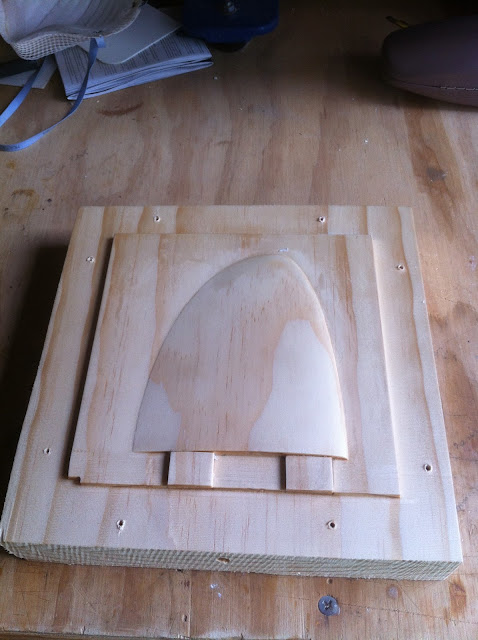 The completed mould block sanded with 600 grit sand paper, and finished with a polyurethane varnish. 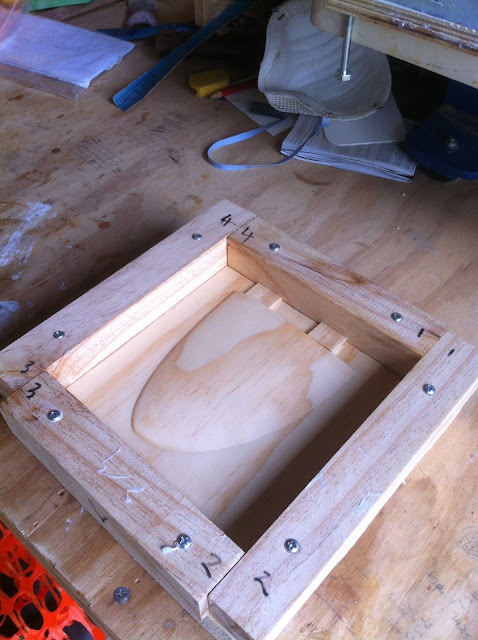 Some timber sides were screwed in place to hold in the silicon rubber. 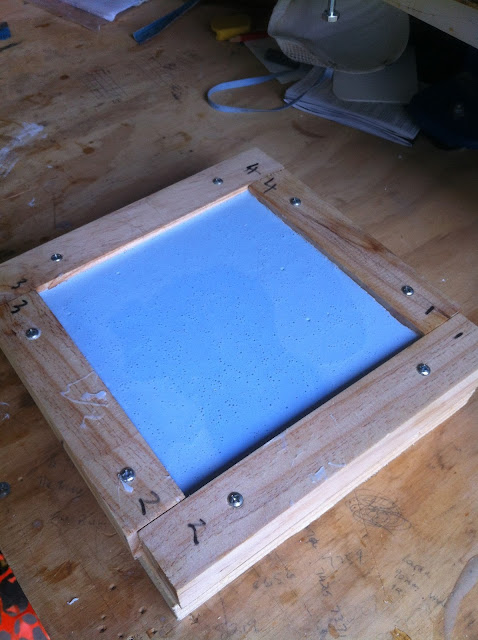 The silicon rubber poured and waiting to cure. This was done for both sides of the fin. 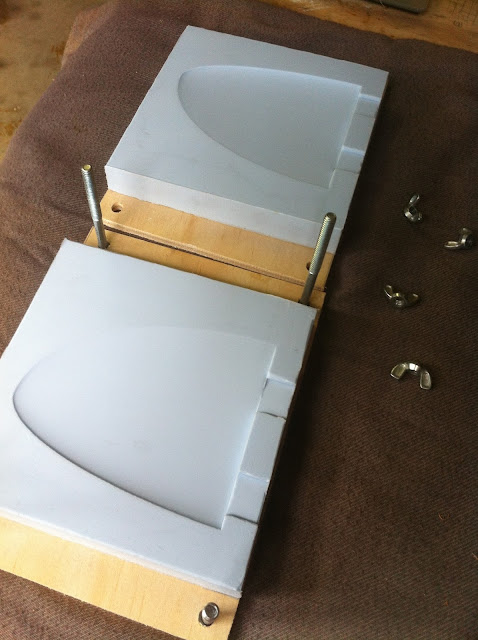 The completed silicon moulds ready to be clamped together. 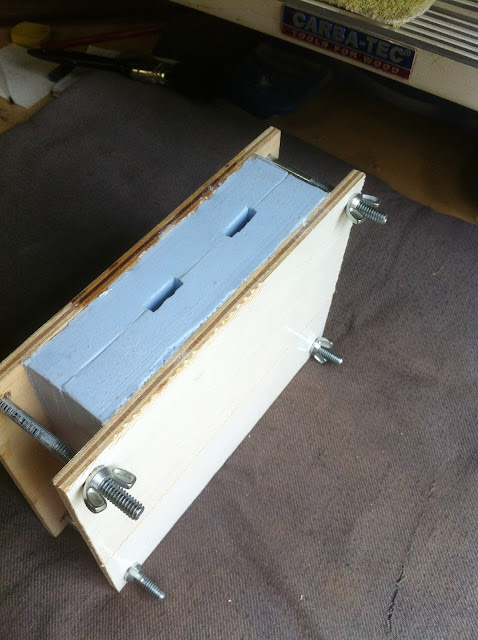 Ready for the casting resin. 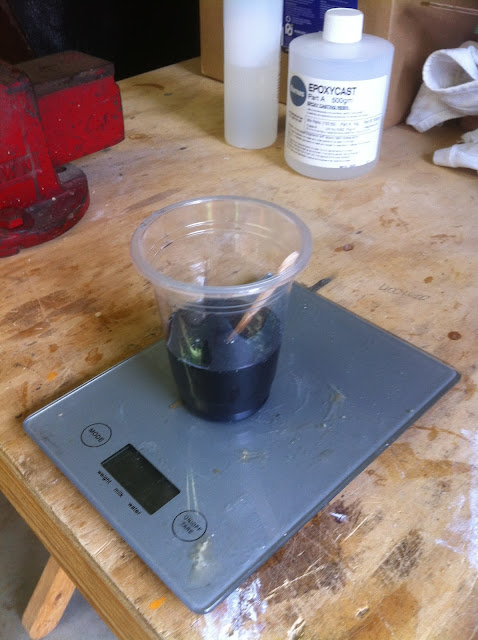 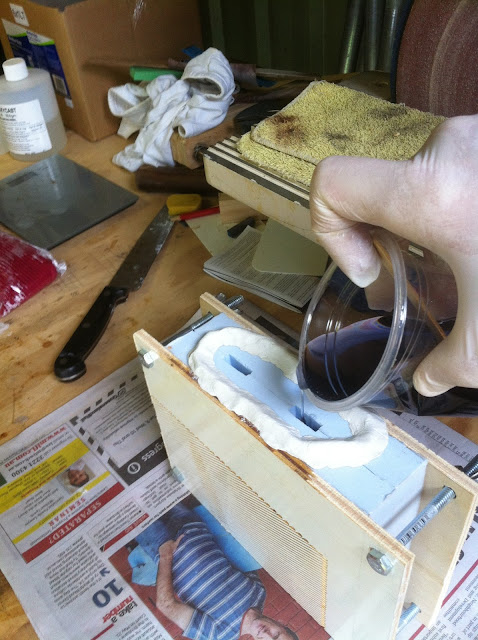 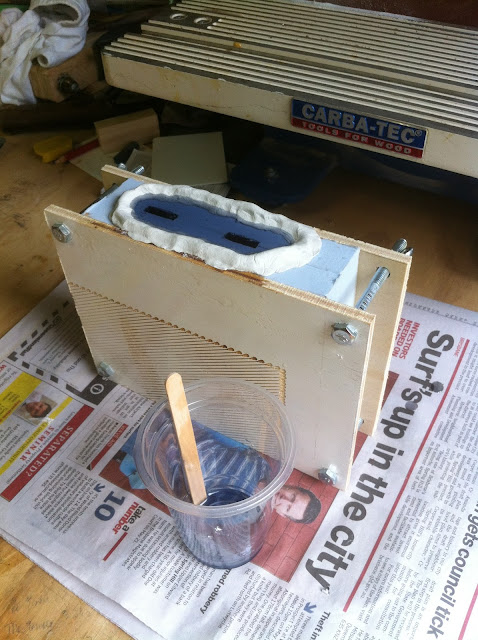 I left the resin to cure overnight. 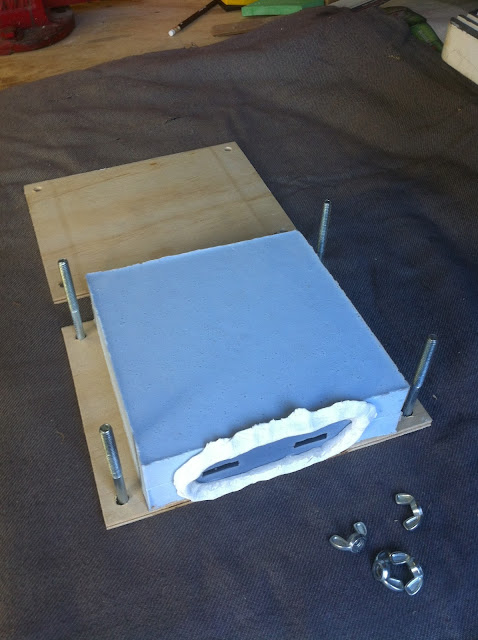 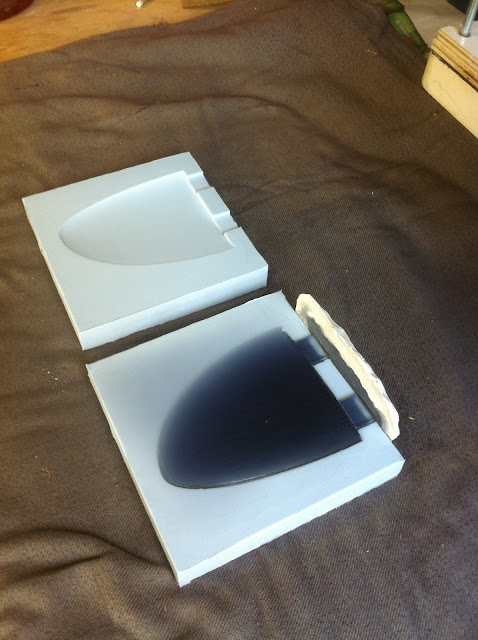 And presto! As my old Dad would say "It's just like a bought one." 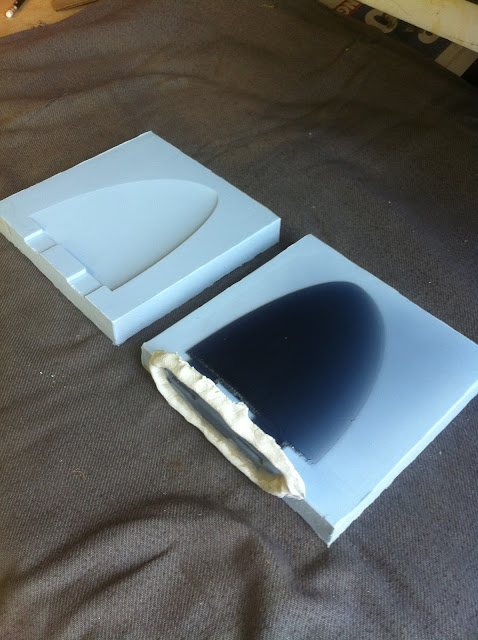 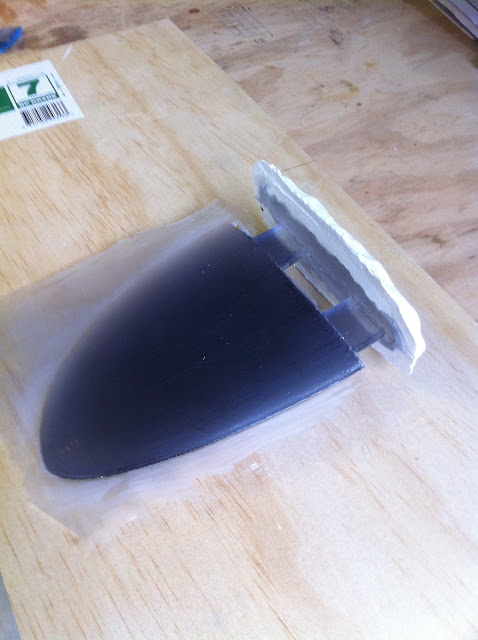 Ready for some light sanding around the edges. 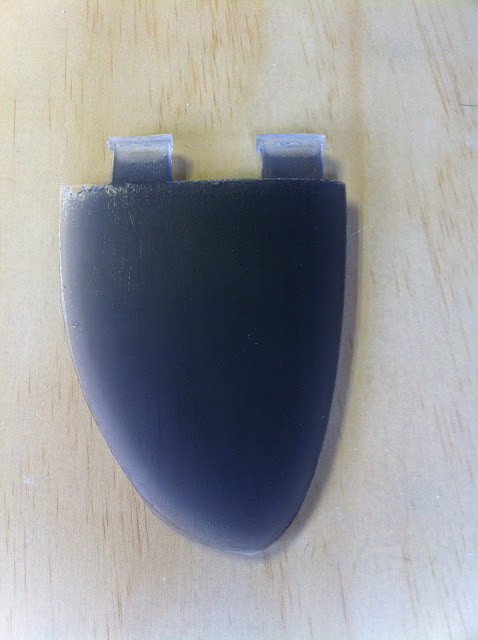 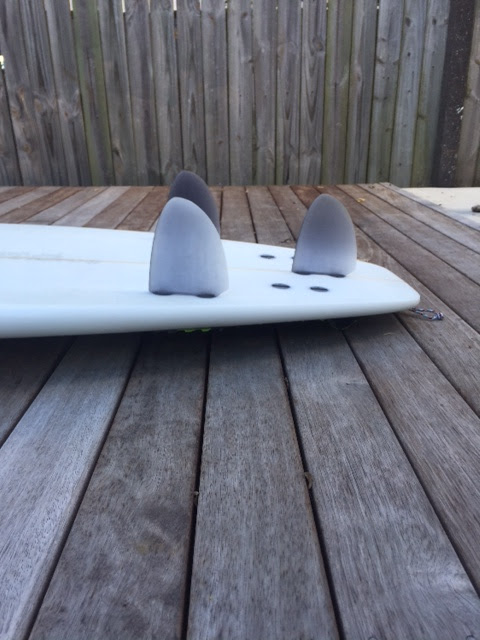 The fins on Paul's board. 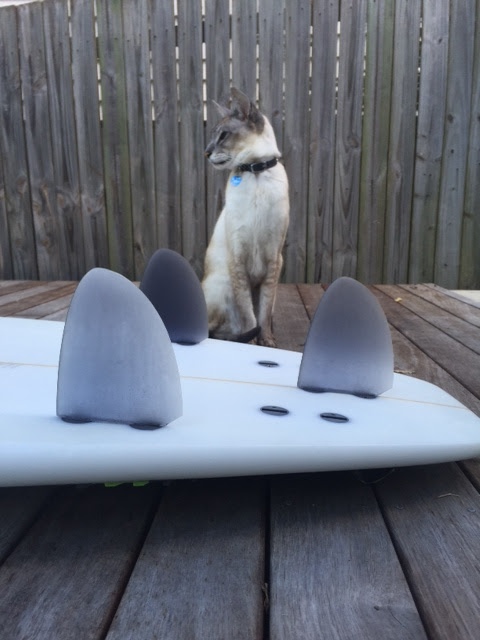 Max the cat has an open mind when it comes to fins.


I made a set of three fins (thruster prototype) for my mate Paul who has been kind enough to test them for me.

To say I was a bit sceptical would be accurate, the constant questioning/jibes from my mate Steve when I turned up with them on added to the doubts.

We arrived at Cotton Beach (southern end of Casuarina) to be greeted to a relatively consistent 2-4 foot SE swell and a nice light offshore.

Thanks to recent noah activity in the area (and a refusal for QLD SLSC to fly choppers over NSW beaches), the lineup was empty.

Tide was low going high and about midway through when we paddled out.

Tide affected the bank by filling in the outside fat section quickly which made for a fast sectioning takeoff.

The board felt different from the outset in that the turn radius seemed to be reduced but the board retained the drive (from the fast take off or through sections). Cutbacks seemed a little more difficult to draw out as it required a conscious effort to maintain a longer arc back to the foam ball.

Upside was once at the foamball a tight arc would effectively be more like a clean face turn than a foam bounce.

The board felt very positive and consistent under foot with barrel sections able to be trimmed without any perceivable looseness.

I was very impressed, keen to try it in more variety of waves to get a better idea (predominantly long rights on the day courtesy of a SE swell and fairly straight banks).